A couple of weeks ago, a very interesting article posted at NetFlix Tech Blog, providing us a view towards a practical video quality metric, as it is perceived by the worldwide leading content provider – NetFlix.

The proposed metric used by NetFlix is called Video Multimethod Assessment Fusion (VMAF) and seeks to reflect the viewer’s perception of the NetFlix streaming quality.  The plan for this metric is to be provided as an open-source tool and to be possible for the research community to get involved in the evolution process of this metric.

The main objective of NetFlix is to deliver content of high quality, providing to the subscribers a great viewing experience: smooth video playback, free of annoying picture artifacts, given the constraints of the network bandwidth and viewing device.

Currently NetFlix utilizes the most contemporary codecs, such as H.264/AVC, HEVC and VP9, in order to stream at reasonable bit-rates with the cost of quality degradation and the appearance of coding specific artifacts. At NetFlix, they encode the video streams in a distributed cloud-based media pipeline (more info is available here), which allows to scale to meet the needs of the service. To minimize the impact of bad source deliveries, software bugs and the unpredictability of cloud instances (transient errors), automated quality monitoring is performed at various points of the pipeline.

Towards the video quality research, NetFlix first starts with building an appropriate data set for experimentation, which meets the standards of the specific services, in terms of content variety and source of artifacts (due to TCP-based streaming, the quality degradation observed at NetFlix is caused by two types of artifacts:

So the objective of NetFlix research is to focus on building a special purpose metric, based on the two aforementioned artifacts, which will outperform the general purpose video quality metrics.

Using this data set, subjective DSIS assessment tests were performed as specified in recommendation ITU-R BT.500-13. The results of these process where mapped to respective DMOS values. The scatter plots below show the observers’ DMOS on the x-axis and the predicted score from different quality metrics on the y-axis, namely: PSNR, SSIM, Multiscale FastSSIM, and PSNR-HVS.

It can be seen from the graphs that these metrics fail to provide scores that consistently predict the DMOS ratings from observers.Above each plot, we report the Spearman’s rank correlation coefficient (SRCC), the Pearson product-moment correlation coefficient (PCC) and the root-mean-squared-error (RMSE) figures for each of the metrics, calculated after a non-linear logistic fitting, as outlined in Annex 3.1 of ITU-R BT.500-13. SRCC and PCC values closer to 1.0 and RMSE values closer to zero are desirable. Among the four metrics, PSNR-HVS demonstrates the best SRCC, PCC and RMSE values, but is still lacking in prediction accuracy. To address this issue, NetFlix adopts a machine-learning based model to design a metric that seeks to reflect  human perception of video quality.

NetFlix researchers by collaborating with Prof. C.-C. J. Kuo and his group at the University of Southern California, developed Video Multimethod Assessment Fusion, or VMAF, that predicts subjective quality by combining multiple elementary quality metrics.By ‘fusing’ elementary metrics into a final metric using a machine-learning algorithm – in NetFlix case, a Support Vector Machine (SVM) regressor – which assigns weights to each elementary metric, the final metric could preserve all the strengths of the individual metrics, and deliver a more accurate final score. The machine-learning model is trained and tested using the opinion scores obtained through the aforementioned subjective experiment on NetFlix dataset.

VIF and DLM are both image quality metrics. We further introduce the following simple feature to account for the temporal characteristics of video:

These elementary metrics and features were chosen from amongst other candidates through iterations of testing and validation. From the posted article, it is not sufficiently clear, how the Motion metric is applied at shot boundaries, which results to high values and most probably are discarded.

Then, NetFlix researches compare the accuracy of VMAF to PSNR-HVS, the best performing metric from the earlier section, where it is clear that VMAF performs appreciably better. 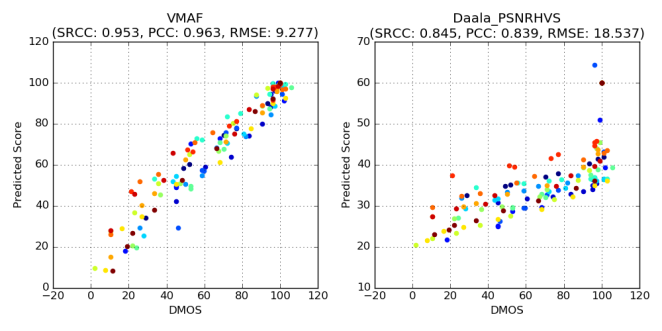 The articles reports also on comparison of VMAF to the Video Quality Model with Variable Frame Delay (VQM-VFD) [3], considered by many as state of the art in the field. VQM-VFD is an algorithm that uses a neural network model to fuse low-level features into a final metric. It is similar to VMAF in spirit, except that it extracts features at lower levels such as spatial and temporal gradients. 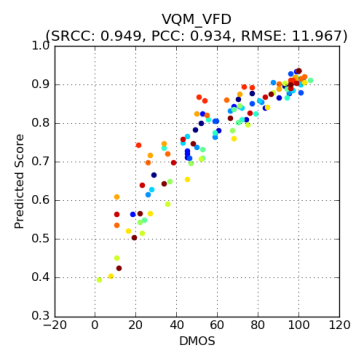 It is clear that VQM-VFD performs close to VMAF on the NFLX-TEST dataset. Since the VMAF approach allows for incorporation of new elementary metrics into its framework, VQM-VFD could serve as an elementary metric for VMAF as well.

Summarizing, the article provides the SRCC, PCC and RMSE of the different metrics discussed earlier, on the NetFlix dataset and three popular public datasets: the VQEG HD (vqeghd3 collection only), the LIVE Video Database and the LIVE Mobile Video Database. The results show that VMAF outperforms other metrics in all but the LIVE dataset, where it still offers competitive performance compared to the best-performing VQM-VFD.

Finally, the article concludes on the current open research issues:

This special issue will cover a broad range of aspects of Localized Algorithms for Information Fusion in RCNs, including ad hoc and mobile
networks, wireless sensor networks, networked pervasive systems. We seek technical papers describing original (previously unpublished in any form or forum) ideas, groundbreaking results, and quantified system experiences. We especially encourage submissions that highlight practical deployments of RCNs, new application domains, and critical surveys of the state-of-the-art. Topics of interest for this special issue include, but are not limited to:

Manuscripts must describe original, completed, and unpublished work not currently under review by any other journal, magazine, or conference.

Prospective authors should follow the Information Fusion (Elsevier) journal manuscript format described at
http://www.elsevier.com/locate/inffus. Manuscripts should be submitted electronically online at http://ees.elsevier.com/inffus. In the submission process, the authors should clearly indicate that the submission is to be considered for this special issue. Manuscripts must be in single-column format, doublespaced, at least 11 pt fonts, and should not exceed 25 pages including figures, tables, algorithms, and references. Simultaneously, please also send without fail an electronic copy (PDF only), to the Guest Editor(s) listed below.

Dr. Harilaos Koumaras is an active researcher in the field of evaluation of the perceived quality of multimedia services (PQoS), including video and picture quality assessment, quality of experience (QoE), video traffic modeling, digital terrestrial television and video compression techniques. Within this framework, Dr. Koumaras is an active member of the Interest Group (IG) on QoE for Multimedia Communications of IEEE Multimedia Communication Technical Committee. During the last years Dr. Koumaras has developed consulting and project management activities by participating in research and industry projects.

Find me at ResearchGate